At present the tough competition in the mobile tech savvy world is between the Samsung Galaxy S4, Sony Xperia Z and the stylish HTC one.

These are the top smart phones that are available in the market at present. The best thing behind the success of these three elite panel smart phones is that, they come from the legacy brands in the world of mobile market: Samsung, Sony and HTC. Today it is the battle of these 3  big giants of smart phones giving a neck to neck fight with their USP punches.

At first let us take a brief look at the three phones: 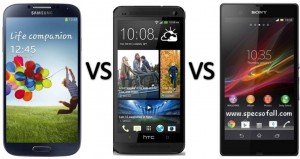 Now, let us check out the result of the neck to neck fight of the trio leaders in the smart phone models.

Storage: The HTC seems to be limited here with storage availability in 32 gb and 68 gb and cannot be expanded, Sony Xperia Z though available in 16 gb but can easily upgraded to another 32 gb through Micro sd card connection. In the issue of storage Samsung has always been a favorites and why not, as it is available in 16 gb , 32 gb and 68 gb and can be further upgraded with an additional 32 gb through the use of micro sd card.

Camera effects: Sony has created a master stroke by fitting a 13.1 megapixel at the back which features with spectacular functions of LED and Autofocus. The cameras are capable of taking breathtaking full HD captured movies. The HTC has the unique Ultrapixel function in its 4 megapixel lenses allowing grabbing video at 1080 p length and photos at 2.1 shooter megapixel foci. Samsung is no where lagging behind rather it has a function where you can see both the cameras at one go.

Going by the looks and special specs of each of these giants in smart phone market it can be rightly summed up that all have their specs which make them stand out tall in their zones.

Be it the S4’s unique eye and voice controlling capacity or the spectacular camera feature and sleeky get up of the HTC or the Xperia’s water resistant certified compatibly.

You can closely look on your eye on specialization and select the mobile of the time.