After the great success of the Samsung Galaxy S4, the company now seems to take on the competitor giants in the mobile world. On 5th June, The Samsung finally officially launched the Samsung Galaxy S4 active, which will be a more sterner and rugged in comparison to their flagship model S4. There were speculations and rumors around the mobile market for quite a long time about the S4 active, which finally paved in gallantry style ahead of the UK meet. 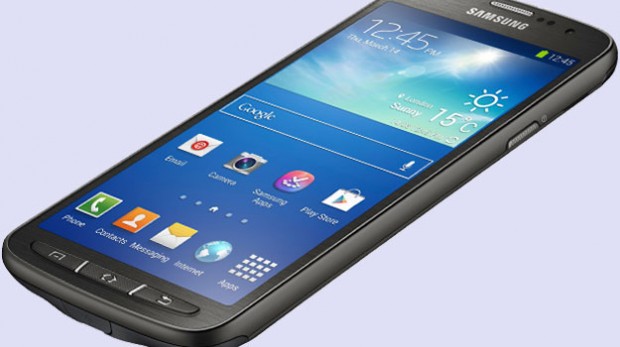 The new Samsung Galaxy S4 Active seems to make some grand adventurous promises. The Samsung has pulled up their socks to take on Sony Xperia and leave stones untouched. The new S4 active promises to be a constant connector while trying any adventurous activities- be it the rock climbing or the underwater scuba diving. The S4 active is predominantly designed to swath through hard surfaces and water surfaces. The newly released S4 active will give a neck to neck fight to the rugged models of Xperia Z and Xperia ZR.
The brand new designed Samsung Galaxy S4 active which is supposedly to go on the market floors in the coming summers is basically designed to those who prefer a more active and rugged lifestyle. The S4 active has been officially certified with IP67, which contemplates that the mobile will be able to get drenched in water for a stand out time of 30 minutes as well as the mobile, is scratch and dust resistant. Though having the newly in built features of rugged look but it will also have the features of S4 like the monitoring of Health and the facility of eye tracking in it.
The Samsung S4 active will have 5 inches screen of LCD TFT featured screen. The phone offers a resolution of 443 pixels per inches. The battery power capacity of the S4 active needs a top mention as the phone has a battery efficiency of 2600 mAh. The phone has an internal in built storage capacity of 16 GB, but with the use of the micro SD card slot which is present in the phone the internal storage can be increased further to an ultimatum of 64 GB.
The Samsung Galaxy S4 active has processor strength of 1.9 GHz strength. The processor is of quad core functionality. The latest released phone for the active lifestyle lovers has camera strength of 8 mega pixels intensity and the phone also has the feature of aqua mode through which high definition images and videos could be clicked through under water. There is also a volume key present in the aqua mode which helps in quick clicking of images and video shooting.
The mobiles in Asian countries are quite familiar of water and dust resistant proof. But down the European lines the rugged natured phones with water proof quality is an unfamiliar scene. The first ones to do so in the European continents were the Sony Xperia Z and Xperia ZR, although they were more focused on enriching the feature of their mobile than the target market. While the Samsung Galaxy S4 active is all set to make an end reach to the Active part of the market oriented people. Though the price of the device is yet to be revealed but it surely seems to scratch new expectations.