Almost silently the Apple started marketing their latest release of IPod touch on this Thursday. The latest released iPod touch of 16 GB is priced less at $229 in comparison to that of the iPod touch 64 GB, which was priced at $399. Mean while, Apple has now stopped its previous highly rated marketing iPod touch 16 GB of 4th generation completely. No more production of the 16 GB iPod touch will be available.
The latest released iPod touch from the apple has a retina display of 4 inches and has a dual core processor with the strength and power of A5 version in it. Some of the things that you need to keep in mind when trying or planning to own the new 16 GB iPod touch for your self are:
• Lack of facility of the camera: the front rear camera option in the latest released 16 GB miner iPod touch is missing. The absence of the very feature of the camera has actually contributed to the new iPod Touch’s reduced and slimmed design. Comparatively the iPod touch weighs lighter to its contemporaries like the 32 GB and the 64 GB, it weighs only 3 ounces.
But much have talked about the super hiking of the price with the limited features and as such no new addition to the latest release than its previous models. Let us take a look of the features it covers and how much is it similar or different to that of its previous models.
• Packaging 16 GB: The model 16 GB which comes in inclusive with the ear pods, USB cable with lightning and a manual start up guide to enhance better understanding of the product to go through its glossary and features.
• Capacity: In capacity while the previous model was 64 GB which was priced $399 while this latest released 16 GB iPod touch amounts to $229.
• Display: In respect to the display quality and functions both the models have simultaneous roles to play. Here no body overshadows the other. They have a diagonal 4 inch wide screen, which is powered by the superior quality of IPS technology multi touch functions enabled in it. It has a retina display, powerful display resolution, the contrast ration of the models are 800:1, and classic coating which is resistant against fingerprints.
• Camera, video and photos: it has the option of Face Time High Definition camera with 1.2MP strength of photos and HD quality video of (720p) at a stretch to 30 frames in one second. The latest iPod touch also has the capability of Face detection functions enabled in it; the Tap to control exposure is also there which can be used either for the videos or for the still photography. It has the facility of geo tagging of a particular photo or video through the Wi-Fi facility. Whereas the previous models had 5-MP isight camera function, it has Backside illumination, Hybrid IR quality filter, LED flash, ƒ/2.4 aperture.
• External connectors and button: The Physical button for the alarm of sleep/wake/on/off button displays at the top right of the device, on the left hand side are the volume buttons, while the home button can be accessed just underneath the main screen in the middle. The Face Time camera is above the screen in the middle, the lightning connector and the jack options can be seen and available at the bottom of the device, while the mic is on the top beside the power button. 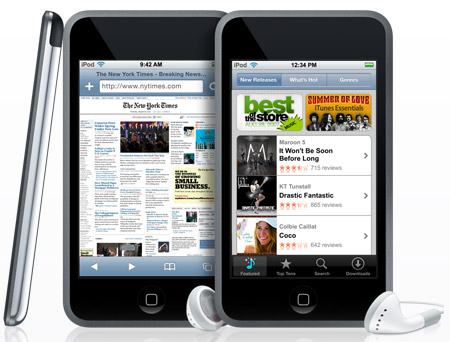 After Apple creating and putting up so much pomp and show in creating a landmark with the iSight camera , the latest released 16 GB iPod touch is completely kept out of it. The worst part that can be said about the latest released model from the Apple is the price. It should be have been sliced to a big difference , where the 32 GB is priced $299 it should and must be within the $150 land mark. With the latest release of iPod touch the brand will come into scanner in a very big way. This is because it will no longer be able to give its signature features in all the models.